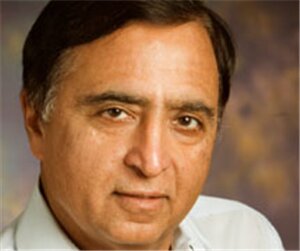 Narendra Ahuja is a Research Professor in the Dept. of Electrical and Computer Engineering, Beckman Institute, and Coordinated Science Laboratory at University of Illinois at Urbana-Champaign (UIUC). During 2013-2019, he was the Founding Director of Information Technology Research Academy (ITRA), a national initiative started by the Ministry of Electronics and Information Technology, Government of India, to pilot a new model of enhancing the quality of advanced technical and related education across India (https://itra.digitalindiacorporation.in/). His research is in Artificial Intelligence fields of computer vision, pattern recognition, machine learning, image processing and their applications, including on problems in developing societies. He received B.E. (Hons) in Electronics Engineering from BITS, Pilani, M.E. (Distinction) in Electrical Communication Engineering from IISc, and Ph.D. in Computer Science from University of Maryland, College Park, USA. In 1979, he joined UIUC faculty where he was Donald Biggar Willet Professor until starting at ITRA in 2012.

During 1999-2002, he served as the Founding Director of the first IIIT (IIITs are dedicated to IT and its applications), at Hyderabad (https://www.iiit.ac.in/), which remains the top ranked among over 20 IIITs now.

During 2014-2019, he directed the ITRA research program, aimed at IT enabled societal problem solving through collaborating teams of academic institutions. It was designed to enhance the quality of problem oriented research and technology development, its impact on curriculum, development of sensitivity to societal needs and outreach to deploy the developed solutions. ITRA work in the areas of IT enabled Rural health, Transportation, Disaster management, Sustainability of water resources, and Agriculture and Food was carried out by 16 teams formed by 76 Research groups at 62 institutions, 143 Faculty, 43 renowned scientists and translators as mentors, 167 PhD students and fellows, and 173 interns. It resulted in 21 prototype technologies that are at various stages of transfer through startups/existing industry.

He has co-authored the books Pattern Models (Wiley), Motion and Structure from Image Sequences (Springer-Verlag), and Face and Gesture Recognition (Kluwer); and co-edited the book Advances in Image Understanding (IEEE Press, 1996); and coauthored over 500 papers in journals and conferences. He has supervised research of over 50 PhD, 15 MS and 100 Undergrad students and 10 Postdocs.

He received the 1999 Emanuel R. Piore award of the IEEE, and the 1998 Technology Achievement Award of the International Society for Optical Engineering, and 2008 TA Stewart-Dyer/Frederick Harvey Trevithick Prize of the Institution of Mechanical Engineers, 2008-11 Open Innovation Research Award from Hewlett-Packard, and a 2010 Google Research Award. With his students, he shared Best Paper Awards from several conferences and journals of high repute. He was inducted into University of Maryland’s Computer Science Alumni Hall of Fame (2016), received Distinguished Alumnus Awards from University of Maryland Department of Computer Science (2008) and from BITS, Pilani (2012), and was conferred an Honorary Doctorate from York University, England (2018). He was selected as Associate for 1998-99 and 2006-07 and Beckman Associate for 1990-91 in the UIUC Center for Advanced Study. He received University Scholar Award (1985), Presidential Young Investigator Award (1984), National Scholarship (1967-72), President’s Merit Award (1966), and President’s Scout recognition (1966).

He is a fellow of IEEE, American Assoc for Artificial Intelligence, Intl. Association for Pattern Recognition, Assoc for Computing Machinery, American Assoc for the Advancement of Science, and Intl. Society for Optical Engineering. He has served on editorial boards of 7 journals. He has served or is serving on the Advisory/Governing Boards of IIIT, Hyderabad; IIT BHU; IIIT Delhi; LNMIIT, Jaipur; Microsoft Research Connections, USA; and Microsoft Research, India; Institute of Communication, Information and Perception Technologies, Scuola Superiore, Sant’Anna, Pisa, Italy; and Swiss Innovation Valley.

He is the founding president of Vision Technology, a computer vision technology company. He has received 4 patents in computer vision. His texture models were incorporated by General Electric in their flight simulators, and by CMC Ltd. in a fingerprint identification system deployed at 50 installations in 4 countries. His solutions to two automated railway inspection problems were combined into a product to scan the railcar bodies (http://www.beenavision.com/products_cscview.html). His prototype of a body-neck-eyes move-orient-verge-focus-zoom stereo vision camera system was a motivation for the establishment of companies such as Helpmate Robotics. His invention of the omnifocus camera was demonstrated to the US Congress as an example of breakthroughs that can arise from unplanned basic research. Ahuja’s algorithms for representation of spatial occupancy were acquired by Honeywell for use in their own systems. His Football Videos Analysis software was one of the earliest pilots for automated sports software analysis (featured in TV sports channel ESPN)

View all publications on Illinois Experts